How Hearing Aids Help with Tinnitus

Tinnitus is the perception of sound when none is present. Patients commonly report their tinnitus sounding like a ringing, roaring, hissing, whistling or whooshing sound. Approximately 15-20% of the population experiences this phenomenon. It’s important to note that tinnitus itself is not a disease, but a symptom of another disorder. While there is no cure, many people have found relief from tinnitus by wearing hearing aids.

The Link Between Hearing Loss & Tinnitus

According to the Hearing Loss Association of America, about 90% of those who have tinnitus also have hearing loss. Both conditions can be caused by similar phenomena.

Within the inner ears are tiny hair cells called stereocilia, which convert soundwaves into electrical energy that the brain interprets as sound. When dangerously loud sounds pass through the ears, these cells can become damaged and begin to misfire, causing tinnitus, or be destroyed, causing permanent sensorineural hearing loss.

Researchers also theorize that hearing loss causes the brain to receive less sound stimuli, resulting in neuroplastic changes in the brain in terms of how it processes various sound frequencies. Tinnitus may be a byproduct of these maladaptive changes.

How Effective Are Hearing Aids?

One 2007 survey of hearing health professionals found that 60% of patients who wore hearing aids to treat their tinnitus experienced at least some relief. Twenty-two percent reported significant relief.

There are several ways hearing aids are suspected to improve tinnitus symptoms. 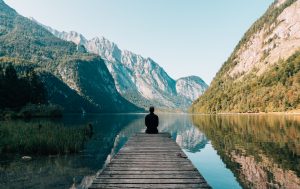 Hearing aids work by amplifying the volume of the sounds in your environment to a level the inner ear can detect. As these sounds are amplified, they mask the bothersome tinnitus sounds. In addition, when you’re paying attention to all the sounds around you that you’ve been missing, you spend less mental energy acknowledging your tinnitus.

Hearing aids are also beneficial in that they increase the amount of auditory stimulation received by the brain. It is possible that this could actually reverse some of the neuroplastic changes in the brain caused by hearing loss, though current studies are still inconclusive.

For more information about treatment options for tinnitus or to schedule an appointment with a hearing expert, call San Diego Hearing Center today.